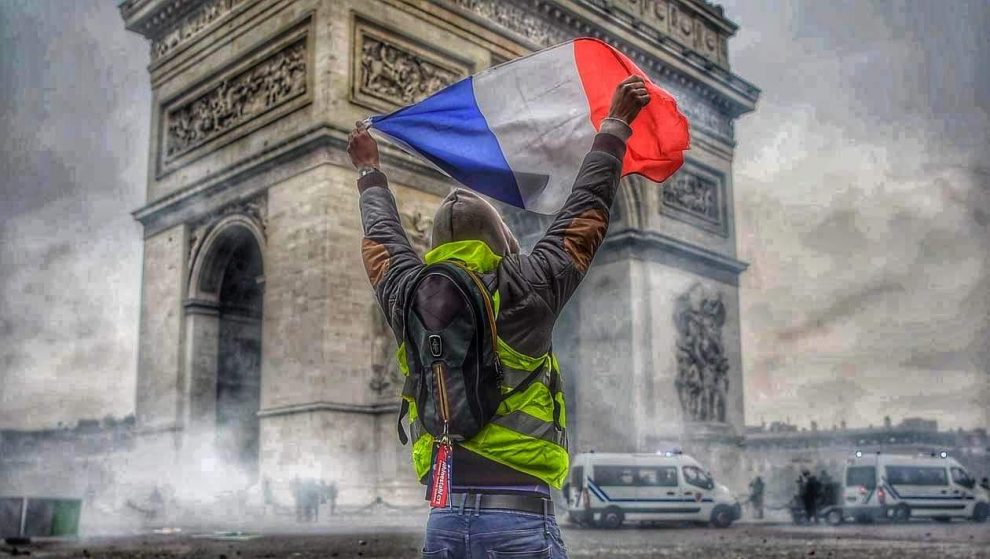 Last Saturday (15.12.2018), the Yellow Vests movement held their “Act 5” in the streets of Paris, as they called the protest in their event on Facebook themselves (Acte 5: Pot De Départ De Macron!). It was, namely, the fifth weekend that all these desperate people – Les Misérables of our times – left their homes and protested on the streets of Paris – why?

As we already know, it all started with the recent announcement of the new measures by the Macron administration on the increase of fuel taxes as of 01.01.2019, which would, mainly, affect the rural populations and the people living in the periphery of France, since they use and need the vehicle for their daily transfers much more than the residents of big cities. The demand on the reduction of fuel taxes appeared to be, however, only the pretext that mobilised so many people. The increase of fuel taxes constitutes only one more symptom of the pathogenic neoliberal system, which does not take everyone into consideration – the majority, in fact. That was the reason that the Yellow Vests’ demands soon escaped their narrow context and have now acquired a broader, a more holistic character, in order to address and defend the low and mid-classes’ needs and rights more effectively.

While the movement was increasingly drawing our attention, thanks to the daily broadcast of the protests and all the episodes in Paris, mainly, through the social media, many people hastened to stigmatize this movement attributing to it, directly or indirectly, an extreme and marginalized character:

i) On the one hand, the ‘malevolent’ ones, those that have essentially espoused the neoliberalist ideology, which narrows down to the silent ‘assignment’ of all crucial matters that normally concern (and belong to) politics to the free-market mechanisms to address them, initially ignored it and now, one-by-one, start putting it aside, categorizing it rapidly to the two extremes of the political spectrum, either the far-left or the far-right (as it little matters to them the difference between the two). They try, in other words, to demonize the movement, showing once more their genuine disinterest for the real problems of the ones standing beneath them in the social pyramid. Whoever dares to challenge and resist against the established reality, which translates the last almost four decades to a dictatorship of economy and the free markets, is, according to them, automatically an enemy of social welfare and democracy – although they rarely use officially the latter term which they tend to replace with the more convenient one “freedom”, by which they mean essentially the only freedom that our system provides in abundance, the freedom of consumption.

It does not take much effort to realize that, for them, democracy means compromise with the current reality. If reality translates today to prevalence of the free-market rationale (which renders the labour market more flexible and “free” only for the employer, by dismantling the trade unions, collective bargaining and agreements, establishing part-time and temp jobs as the norm, reducing wages and disregarding overtime in work, etc.), then the rest of us are called to adjust our lives accordingly and continue living under these terms; regardless if not all of us begin the race from the same socio-economic starting line. Their democracy, namely, means to paralyse before the neoliberalist raid and harmonize ourselves with the environment, since “c’est la vie; nothing can really change”. Democracy, in sum, means obedience, being quiet – the absolute fulfillment of the Orwellian nightmare that described how distorted the content of words and meanings can get in its dystopian totalitarian society, in “1984”. But they are not naïve. In our current Western societies, where the old-fashioned way of suppressing a mass movement (by exercising raw violence with the help of the Army and military tanks) can hardly be tolerated anymore (thanks to all the popular/civil rights movements of the past and their achievements that rendered even the thought of it impossible), there isn’t a more efficient and invisible way to control the masses than to twist the meaning of such radical notions, as freedom and democracy. If you control their meaning, you control everyone.

ii) On the other hand, the rest people, independently of their political orientation, who have no bad faith, but keep watching frozen, at the same time, the danger of far-right lurking behind each corner in Europe and the world in general, have been accusing ‘gently’ the Yellow Vests and the episodes in Paris, as they are afraid that such movement might contribute at the end to the further increase of every Le Pen’s, Orban’s and Salvini’s popularity. And they are not entirely wrong; being our “brave new world”[1] a globalized world, it cannot but proceed and develop also altogether, at once. Unfortunately for all of us, the only element that forgot to be part of this trans-border ‘experience’ is, so far, human solidarity.

The first category of people is quite known and needs no further comment. Those that have paired freedom and democracy with obedience and quietness, let us only remind them that the Athenian historian Thucydides, during his description of the Peloponnesian war, had highlighted: “Either freedom or quietness [obedience]. You must choose. Either you will be free, or you will be quiet. Both cannot coexist”.[2] But, they have now turned their pharisaic attention to Adam Smith’s lines in ‘The Wealth of Nations’, and only. Even him, though, they did not try to read him carefully, as it seems that they ‘forgot’ Adam Smith’s deep moral concerns that he expressed, simultaneously, for the economy and its impact on the human psyche.[3] All tailormade then, as it appears. Well, doesn’t the same apply to all religious fanatics anyway?

As for the rest, here is where we really need to clarify things for our own good and sake:
Even if the Yellow Vests movement ends up contributing and furthering the far-right rhetoric (Salvini already started accusing Macron’s measures for the protests in Paris), this does not categorize the movement automatically to the extreme right. Let us be careful here. Spontaneous movements, like the Yellow Vests, regardless if many suspicions arise now for Russian meddling through social media accounts, do not belong anywhere. They are impulsive cries of anguish that are expressed spasmodically, due to the insufferable misery and poverty that the weaker classes experience (labour – rural classes) because of the new measures, either in the periphery of France, or of the US, or elsewhere. Inevitably, however, this spontaneous and reflexive movement will, sooner or later, settle down to the one that will provide them with more persuasive hope. And, yes, the extreme right has, nowadays, monopolized the supply of a different future, the possibility of an alternative reality.

If democracy means in its essence constant interrogation of reality, politics and its institutions, till they all come down to agree with the majority’s opinion, the only remaining vehicle of questioning things today seems to be, mainly, the extreme right. The left has committed suicide multiple times already and more recently, historically, than the far right. For this reason, it finds it hard to convey hope and convince the people. Let us only recall Germany’s example and the measures the German government took back in 2003, which intended to render the labour market and relations more flexible (the same measures that Macron’s policy is trying nowadays to imitate). The package of those neoliberal measures, known as ‘Agenda 2010’, was announced and adopted by the, so-called, left, by Schröder’s socialistic government – no surprise that the election percentages of the Socialistic party (SPD) are dropping ever since. Isn’t this, actually, what happens with SYRIZA in Greece ever after July 2015? Let us read carefully the answers that reality itself provides: As long as the left will be applying the (right-wing?) neoliberal agenda and adopting the free-market practises, by removing – in sum – politics from the pilot’s seat and letting our future to the hands of a managerial technocracy and the markets, it will be killing itself every time a bit more, and together with the left the very concept of ideology will be dying as well, which will end up being just a puppet serving exclusively the needs and desires of the far right. We need to understand this: Ideology without actual application cannot stand any more on its own – it’s not persuasive any more. There is no time left.

Therefore, let’s stop the rest of us with this a priori categorization of this movement, this frivolous baptising, and let’s listen to it closely with care and honesty. The only thing that such a stance accomplishes from our side is to undermine the reasons and the goals of this movement, and to exonerate, on top of this, the leftist consciousness that it didn’t do anything wrong, although what happens is exactly the opposite.

Leonidas Rigas is a lawyer and works as an IP & Competition law lawyer in Munich.